In our country today, hundreds and thousands of people, including children, remain behind bars over mere suspicion of crime. These under-trials, some of whom have spent decades in jail, are part of a system of ‘justice’ that files a charge, presumes guilt, and then impresses upon the accused to prove innocence. When mere suspicion is enough, and arrest is read as conviction, the struggle of political prisoners takes on a whole new meaning. Political prisoners have no innocence to prove. Instead they stand trial to prove their right to hold their beliefs, convictions and principles. One among many such prisoners is Dr. GN Saibaba, an assistant professor of English in Ram Lal Anand College of Delhi University. He is also a human rights activist, who happens to be a wheel chair bound person with 90% disability due to infantile paralysis. Currently his family is facing the threat of eviction from his residence within the university that he has been part of for over a decade.

Dr. Saibaba is at present a resident of Nagpur Jail. He has been housed in the solitary barracks, with limited mobility on a broken wheelchair, without basic amenities entitled to a person with disability. He is portrayed by the police through the media as a ‘high security risk’ to the Indian nation. On the 9th of May 2014, he was abducted on his way home after exam duty in the university in broad daylight by plain clothed persons. He was then flown to Nagpur, taken to Aheri Court and declared arrested. The charges against him range from ‘waging war against the state’ to petty theft. The arbitrary raid at his residence in September 2013, the repeated efforts to make him come to Nagpur, the lengthy interrogation at his residence in January 2014, and finally the sensational abduction and arrest splashed across the media reports as a ‘dreaded Maoist’ in May of last year are just a few episodes of harassment faced by him. But most of all, this treatment meted out to him over the last two years, makes one wonder at the consequences of raising our voice for the democratic rights of the vast majority of oppressed sections in society in a country that prides itself as ‘the world largest democracy’.

Besides the relentless harassment by the police, the threat of Dr. GN Saibaba’s arrest on fabricated charges hung in the air for almost a year. On the 9th of May, Dr. Saibaba found himself at the center of a calculated effort to malign and discredit him through the drama of clandestine abduction and arrest using wanton force by the police that painted the picture of imminent threat. The stories fed to the media have been utilized by the police to reinforce the fabricated charges. One needs to consider what this exercise was meant to achieve. How can a wheel-chair bound person well known and regarded in the intellectual circles, a conscientious voice that speaks for the rights of dalits, adivasis, Muslims, and all sections of the oppressed masses, and a man who has cooperated with the police every step of the way simply be branded a terrorist, hauled off to court, accused of obscenely improbable charges, and repeatedly humiliated under the aegis of the state?

This exercise can hardly be about legality or commensurate punishment let alone about proving guilt. We have been witness to hundreds of such cases of fabricated charges against intellectuals and activists, and the deliberately prolonged judicial process of trial, even as the state as the prosecution builds and rebuilds its case. And finally, the well rehearsed circus of ‘insufficient grounds’ and ‘unconditional acquittals’ for uncompromising individuals even after years spent in jail. The struggle doesn’t end with acquittals. Once such targets have been branded, life after jail can be daunting. One only needs to hear the narratives of Soni Sori, Binayak Sen, Arun Ferreira, Seema Azad, Jeetan Marandi, Sudhir Dhawale, Arup Bhuyan, Abdul Shakil Basha, Abdul Nasir Maudany, members of the Kabir Kala Manch and others. The pain and humiliation is embedded in the process. This process plays itself out over and over again in the backdrop of a country that claims to be a democracy. And the pillars of the state, the law, the judiciary, and the police remain mere props for those pulling the strings of the wretched marionette.

Here, it becomes imperative to ask some fundamental questions. Can the state, in the name of the nation and for the realisation of democracy, pursue a systematic and relentless assault on the voices that question its fractures? Does the practice of democracy require the silencing of the voices that threaten the status quo? Are we to confine ourselves to the prisons built for us by the wardens of the idea of India?

Today, the Committee for the Defence and Release of Dr. GN Saibaba is asking these questions. This committee, formed soon after the arrest of Dr. Saibaba, came together to stand united on his behalf, and his right to lead a conscientious and dignified life. This booklet is part of our campaign to highlight the way in which this exercise in justice has twisted the logic of the law to suit its ends. The committee intends to campaign for the immediate and unconditional release of Dr. Saibaba and all such prisoners of conscience. It hopes to unite hundreds and thousands of voices in solidarity willing to speak up for the right of democratic dissent. We hope to present in clear and lucid terms the treatment meted out to political dissenters through the case of Dr. Saibaba. And through this we hope to come together and stand in solidarity with every such voice that must be freed from the prisons we’ve made.

A Day of Protest…

Convention to Save & Free G N SaibabaMay 23rd, 2015
Come and express your solidarity with G N Saibaba. A protest meet with Writers, Artists, Teachers & Students, Journalists, and Activists and other Political Prisoners. 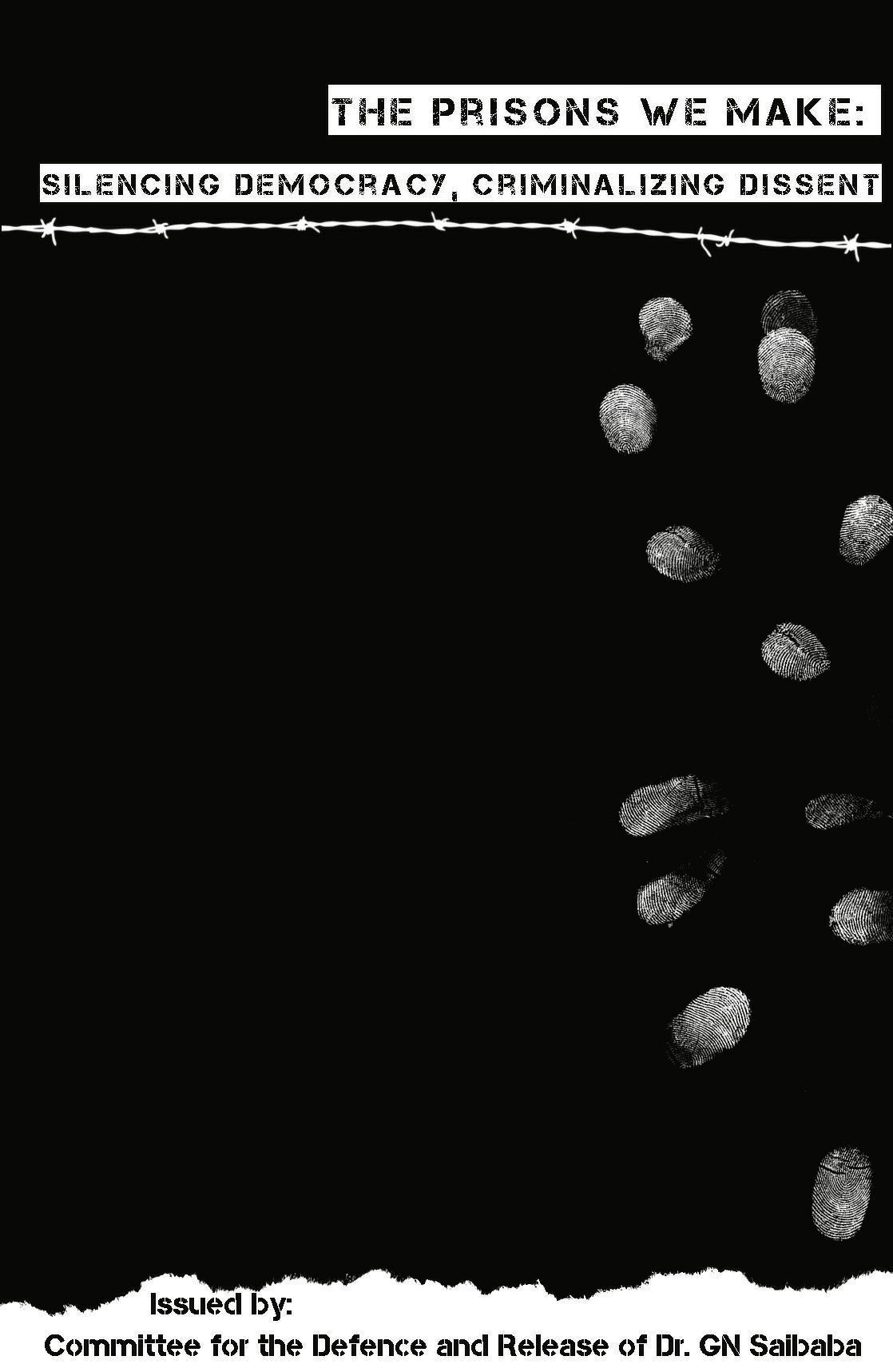 Please read and distribute. To order, write to us.